Not many people pay capital gains tax and still fewer would be in a position to claim rollover relief, That said, it is a valuable relief and certainly one that business owners should know about… 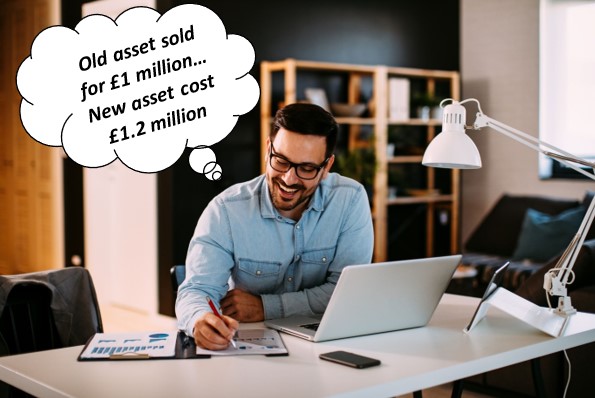 How does it work?

Relief is available when the proceeds from the disposal of the old asset are reinvested in another qualifying asset. Both assets have to be used for the purpose of a trade.

Rita sold the goodwill of her hairdressing business for £150,000. She had built this up from scratch so the whole £150,000 represented a capital gain.

Six months later she bought the freehold of a shop and started up as a florist. The shop cost her £325,000.

After a talk with her accountant, Rita decided to rollover the gain on the hairdressing business. She pays no capital gains tax on the £150,000. Meanwhile the acquisition value of the shop is adjusted as follows:

This ensures that if and when Rita sells the shop, she will pay capital gains tax on the increase in value of the shop plus the rolled over gain of £150,000.

In April 2020 Othello sold a factory for £1 million. He had purchased this asset 7 years previously for £400,000 so had realised a gain of £600,000. The factory had been used throughout for carrying on Othello’s trade.

A year later Othello purchased another factory for £900,000 and immediately occupied it for carrying on a new trade.

‍If Oslo reinvested the entire proceeds in a new shop the gain that could be deferred would be £25,000 (50%). The relief is restricted because the original shop was only used for trading purposes in 5/10 years of ownership.

Not at all. There may be compelling reasons to pay capital gains tax at a lower rate now rather than risk a much higher rate of charge when replacement assets are disposed of later on. This is particularly appropriate if assets are sold in conjunction with the cessation of a business, or part of a business. If business asset disposal relief can be claimed, the tax charge today is only 10%.

What we don’t know is the future structure of capital gains tax. It is ripe for a significant overhaul. Expectations are high with every budget and tax review.

C & H Stedman recognize the complexity of this tax and will be pleased to provide further guidance required.